“When we started, we heard that an Holacracy adoption is probably a 5-year journey, so this is a halfway report.” – Lutz Kögler from Nightnurse Images (NNI) in Zürich.

In 2019 Koen Bunders from Energized.org started as a coach at the architectural visualization company. Lutz is one of the three founders of NNI. The company creates visual designs for architects. On March 29th, 2021 Lutz and Koen shared their perspectives on the NNI journey so far. Here are the takeaways. 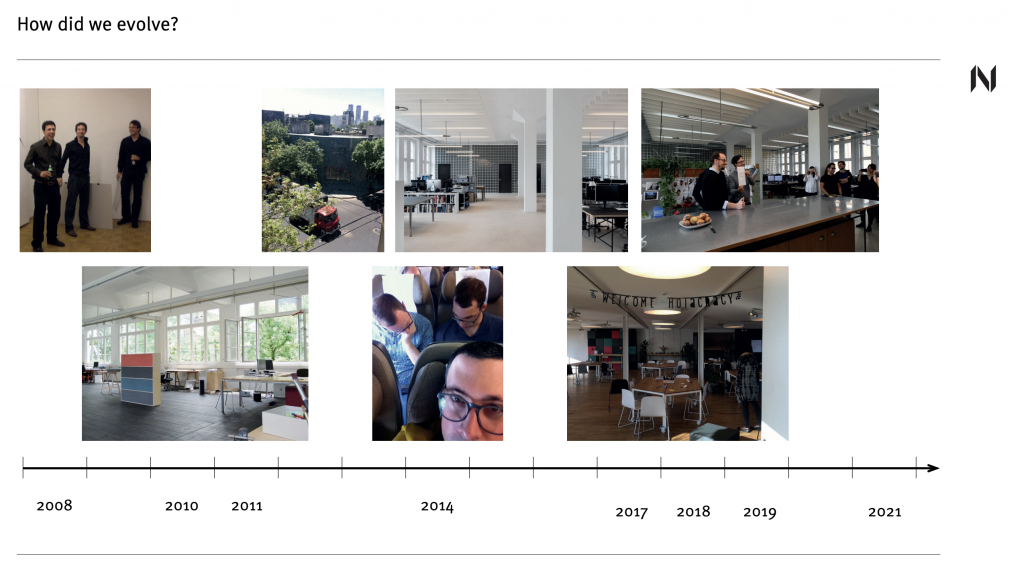 Why did we choose Holacracy?

Lutz, “We realized in the years before we started with Holacracy that we – as founders – became more and more of a bottleneck for the company. When a decision had to be made, the founders decided. That took time and took energy away from our crew. And we weren’t getting the best ideas. Because the ideas and decisions had to come from the three founders only and not from the 16 people that were working at the company.”

“The book Reinventing Organizations from Frederic Laloux had a profound impact on us and we thought that Holacracy could be a great way forward for us. ‘Unlock the power that is in our organization somewhere’ became our new mantra.” 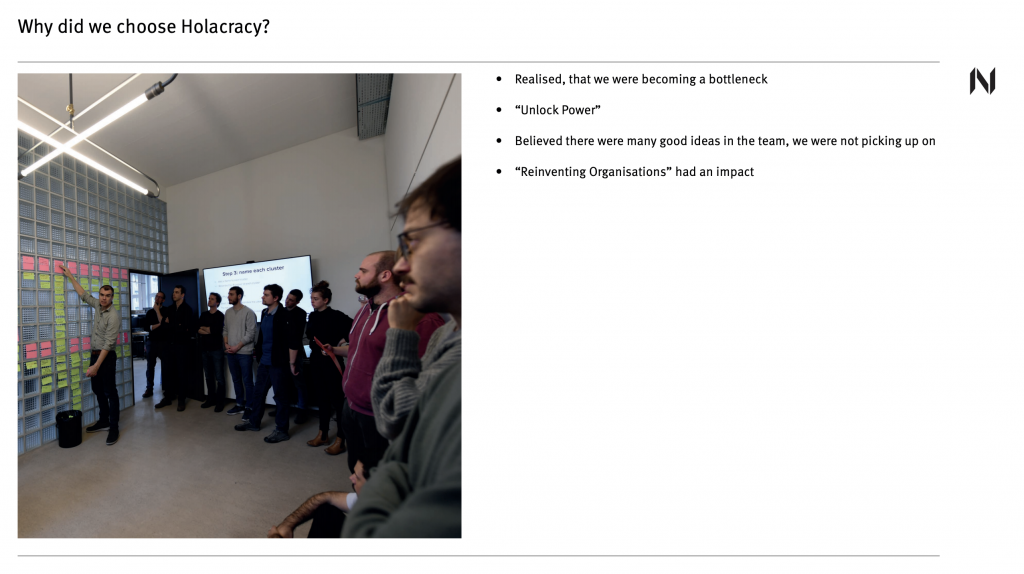 Where NNI is now

Lutz, “Let’s have a look at the journey via Gartner Hype Cycles. This cycle provides a graphic representation of the maturity and adoption of technologies and applications, and how they are potentially relevant to solving real business problems and exploiting new opportunities.”

If we map ourselves on this map, this is where we are now.” 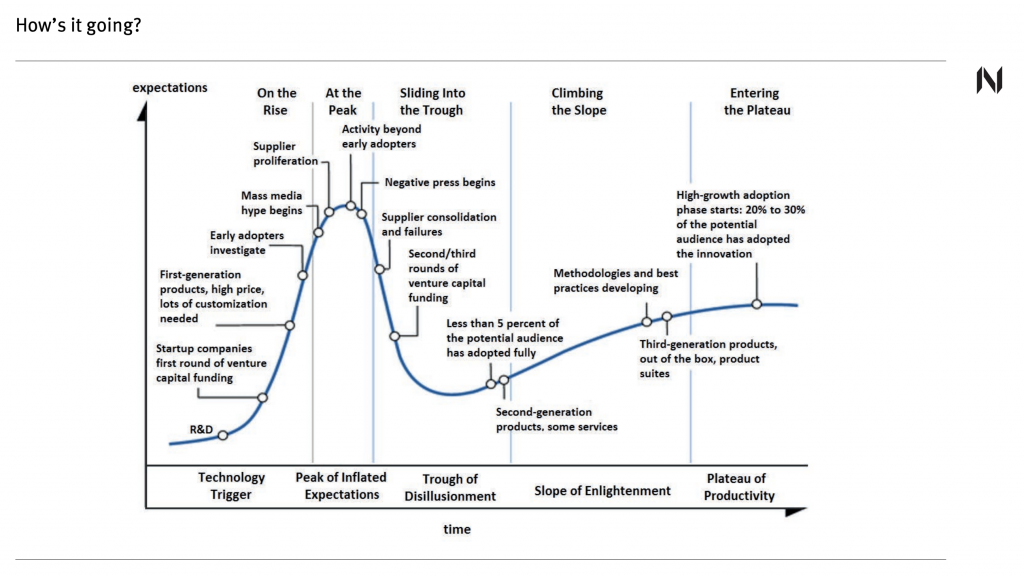 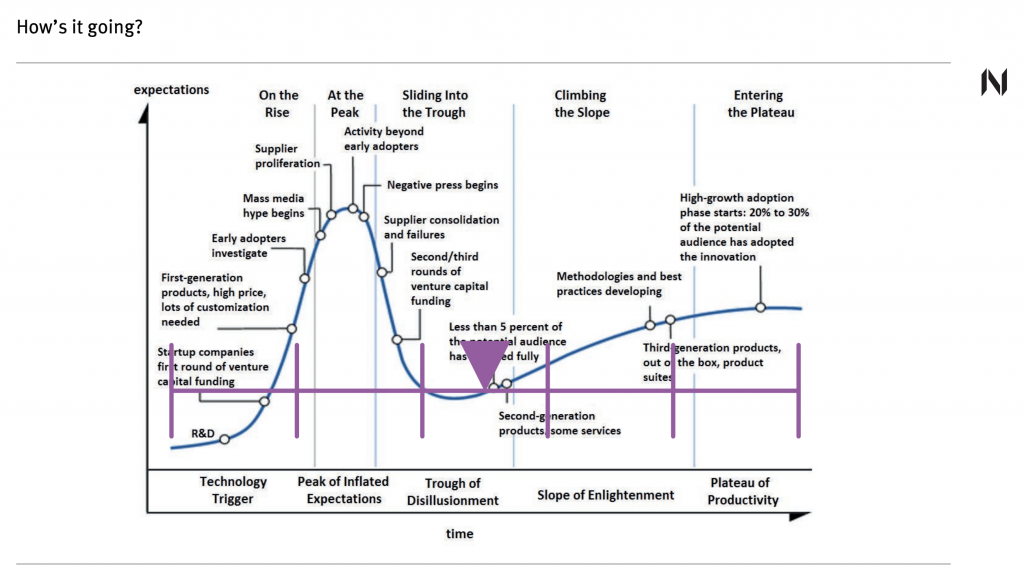 “We have seen a trough of disillusionment. I’m not entirely sure if we have left it behind us. Or if we are still in the middle. But we have evidence that some wonderful things have started to happen. I remember sending out a letter to the crew when we hit off. This was the text:”

We are buckling up for the trough of disillusionment that will surely come, and go. We also firmly believe that we will be sitting in the sun on the roof of the plateau of productivity. We are looking forward to having a drink of enlightenment and soda. Watching the sunset behind the peak of inflated expectations.

“It is also not a secret that we are not quite there yet. The trough is a difficult place to be in. We have phases. A couple of months ago we realized that there was a heightened sense of tension. The tension was about ‘are we doing the right thing?’. Some people started mentioning the possibility to go back to the old way of working. As founders and ratifiers, we decided not to stop with Holacracy. We, because as ratifiers you can undo the Holacracy adoption, could decide to stop. But we decided that that was not the way to go.”

Koen adds, “At Nightnurse Images they took the brave decision to invite the entire company for a Holacracy Practitioner Training. After that, we focused on the first 5-6 months in helping the Night Nurses to practice Holacracy on a self-sufficient level. They started doing the practice on their own from then because they reached a high enough mechanical level to evolve further by practicing.” 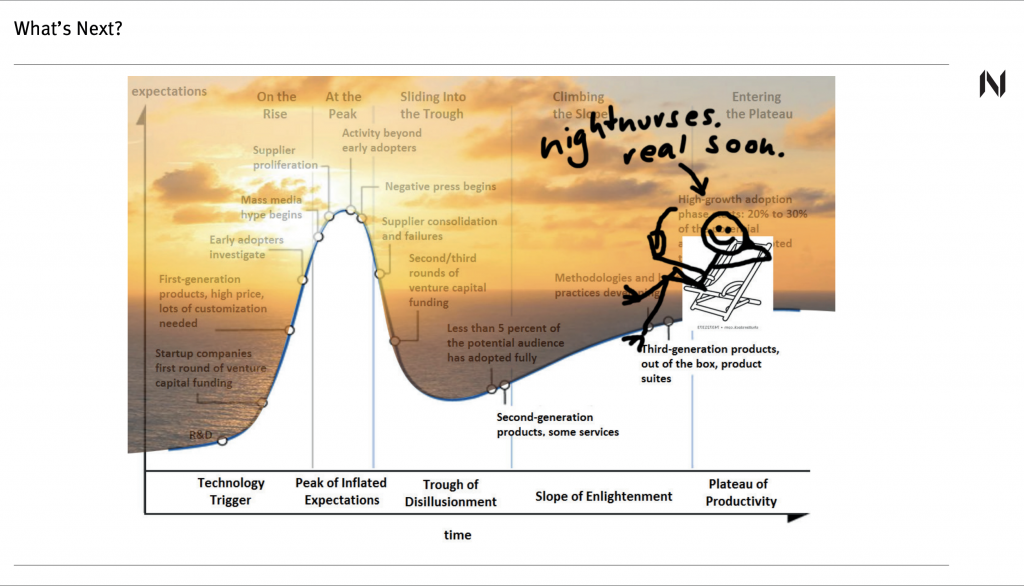 Questions about Holacracy adoption for Lutz and Koen

Does Holacracy fit everyone?
Lutz, “My experience is limited. But Holacracy is a tool. You can make it do what you want it to do. You don’t need skills or a particular type of people to make it work. It is made to make the improvements that everyone sees in his or her own way actionable. I could be proven wrong, but I really think it is just a tool.”

Koen wrote a great article about that: “Holacracy promises me full autonomy, right?”. Because you can do whatever you want to do from your role. And that role is part of a greater whole. You can use autonomy to support the greater whole. Painting the walls green takes boldness and I encourage that. I don’t know how it takes the organization forward, but if someone decides to do it they probably have a reason for it.”

Koen: “The anxiety about ‘green walls’ is probably a symbol of the difficulty of letting go of direct control. As a co-founder of Energized.org I have had a similar experience: I remember when we adopted a policy that allowed others in our company to spend money, money that legally was Diederick’s and mine. I felt anxious about increased spending. Our money. Now in the hands of autonomous others. The opposite happened. The spending went down when we allowed for more freedom.

Now be aware. Holacracy doesn’t force you to let go of control. Holacracy is not the form or structure, it is the framework to create the structure, any structure. You can create a very controlling structure or a structure with lots of freedom, it is up to you. Do whatever fits your context, you can gradually let go of direct control.”

Why did you choose Holacracy and not something other Teal model like Sociocracy?
Lutz, “We didn’t overthink it at the time. We heard of Holacracy. We were able to trust it enough to give it a shot. So, we didn’t do the research, into depths. We just gave it a go.”

How do you overcome the mindset of asking for permission?
Lutz, “The challenge is to create a context where everybody has the tools to make a decision and the data and the courage. They have to know that they won’t be shout at or fired. It is a 2-way process that you want to take seriously.

What is a struggle right now?
Lutz, “I spoke to the other co-founders over lunch today and asked them how they would describe the current state. More courage would be really helpful now. Apparently, we’re still not enabling everybody to do what they need to do.”

Koen, “Maybe your company needs boldness now Lutz, but for other companies: please realize that this journey (this powershift) takes years. So you need compassion and patience too. It simply takes time to lose the parent-child dynamic. Courage helps to explore new ground, but there is no need to stretch the pace of change too far. Your governance structure can reflect current reality and it can evolve from there.

I have an anecdote about that. I coached once in a company where a guy came up to me and said that he hated Holacracy. I asked him why. He replied that the adult-to-adult metaphor we spoke about annoyed him. When he was a boy he loved it, when his parents decided for him where they would go on a summer vacation. He simply loved that, and that was exactly what he wanted in the organization: some decisions should be taken by others than me. I offered him the pathway to propose exactly that in the next Governance meeting that they were about to have. His role was expecting some decisions to be made by other roles – not himself. He proposed roles that decided on his ‘summer vacations’. And it was arranged. Now he loves Holacracy.”

Lutz, “Some people just don’t want to get involved in the responsibility game. And I trust it was a conscious choice they made for themselves.”

What question would help to ask applicants?
Lutz, “Well for me it is still the same as before Holacracy. It is on an emotional level for me. If I can give a handshake and experience that I would probably be able to work with this person, that’s when I decide. Can I – on a personal level – get along with this person in this company? I’ve been proven wrong of course. But it is still true for me.

If you start a new job there is so much to consider. First, that you want to do good at a technical level. And on a social level. And then Holacracy is the third thing to confront them with. But I don’t think we ever had anyone being disappointed when we mentioned that we were interested in self-organization.”

Koen, “If there would be one thing, I would look for sensitivity for tensions. You need people who can sense what can be or should be better in the company. Tension is fuel. Some people have become numb for sensing tensions. For example, because they’ve worked in a hierarchical machine bureaucracy for years and learned that having tensions is not useful because they don’t have the means to process them.”

Has your shareholding changed with the setup of Holacracy to reflect the change in power dynamics? Otherwise, what is the impact of corporate governance (and corresponding power structure) on the effectiveness of Holacracy and the autonomy felt by your employees?

Paul, “I interviewed Brian Robertson recently for a podcast and asked him about the effect of Holacracy on equity relationships. He said that it’s quite neutral. You can listen to the whole interview here.

I see that Holacracy shifts behaviors (which will then prompt a change in thinking and feeling). My current hypothesis is that working to change mindsets by taking a singular approach (i.e., changing actions alone) is insufficient. I am starting to think that a multi-faceted approach would speed adoption (and lower inter-personal issues and “people tensions).

Koen, “Not sure if I fully understand the question. When looking back at our implementations, we don’t spend too much time trying to change mindsets from that angle. In practice I see mindsets change as a result of offering people a new framework/system/ruleset to get things done in the organization, helping them to learn the new behaviors and unlearn some of the old behaviors. From persecutor to the challenger. From victim to creator. From hero to coach.” “We have seen in many cases that helping organizations in the (inter)personal realm with additional training and coaching is supportive to the adoption of Holacracy in the realm of roles (and vice versa)”.

Do you believe Holacracy invites us to use and develop higher levels of emotional intelligence to work more effectively in this structure? Have you experimented with, considered, or invited people in the organization to explore different types of behavioral therapy e.g., CBT or REBT?

Koen, “Yes. I do see that growth in one line of development often catalyzes growth in other lines of development. It is the co-arising that Ken Wilber talks about. I personally don’t know of organizations that work with CBT or REBT, but we have seen and experienced growth thanks to our practice of Systems-Centered® Training. Feel free to contact us if you have any questions.”

Have you changed how you work on an individual level when adopting Holacracy? Have you picked up some of the Getting Things Done practices?

Koen, “Before practicing Holacracy, I was already practicing GTD. In our implementations, I do see that many benefits from learning about the GTD habits, when working in a Holacratic context. Apart from that, I see that how I work has become more relaxed. A few examples: I don’t have to carry all of the burdens, I can rely on other roles now. I don’t have to predict and control but can trust I can dynamically steer along the way. I don’t have to prevent causing tensions elsewhere in the system, but can trust that if I do cause tensions for others elsewhere, they can process those tensions themselves.”

Is it true that Holacracy only covers work?
Koen, “Yes.”

Let’s talk and discover your journey